I want to hang out with this guy:

larrytemc22 days ago
Our goals as capitalists should be to create socialist robots that work for free in an economics systems not based on redistribution of wealth on the front end or the back end. Only those individuals that dig calculus and can't get a date will be a part of the new economics order. These select individuals will be allowed to drive fast down empty streets to the sound of loud rock and roll. The rest will be assigned to holo-decks where they will be infinitely rich in a virtual sense and can do whatever they want -- except screwing up anything real.

Workout log to drop this evening, forgot my notes this morning.

Signal Processing Lecture 14 YouTube and the work firewall appear to be having an argument, and since this isn't remotely for entertainment purposes, I'm just going to see if I have the same issue with embedded videos.
more...

My assumption is that the armed forces ran a sizable number of tests where they found a high enough correlation between the height/waist/weight numbers and body fat as found by some method generally accepted as highly accurate, likely immersion testing.  A simple formula and a tape measure/scale are a lot cheaper than immersion testing all applicants, so I don't doubt that this is basically what led to the estimation method.

Given how much lower this number is than what my scale claims, it would give me a very handy excuse for why my weight loss has been so slow lately, and mean that my goal of 160 lb is again unrealistic, since according to both estimations, this is almost exactly the current weight of my lean body mass, representing not 14% or even 11% body fat, but 0%, which is equivalent to death.  I'm not fully sold on these numbers, but I'm beginning to be persuaded that maybe the numbers aren't really all that important.

We all know, instinctively, what "fit" looks like.  My stated goal of X body fat % or Y pounds of body weight are just quantifiable notions of much hazier goals.  I want to be light on my feet, strong as an ox, and have a washboard above my belt buckle.  I really only track the numbers because day-to-day progress (or lack thereof) isn't always readily visible, and hard metrics help me make decisions about what's working and what isn't.  If I somehow manage to hit my real-if-hazy goals, I'll count that as a win, and move on to others.

This looks so much like my notes from Math 597 it's spooky.

Whether or not you understand a word of this... This post on Bruce Schneier's blog is important, and the content may easily have an impact on your life.

I'm sure this can't possibly lead to inflation 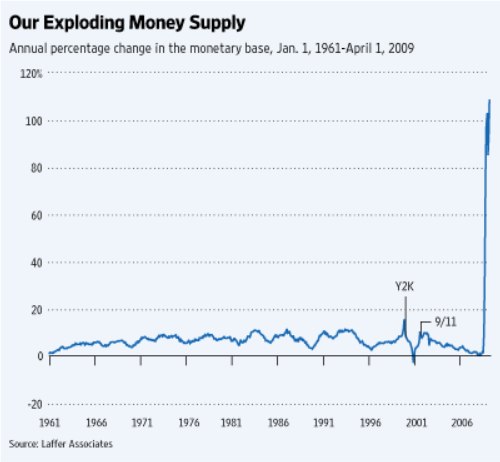 Why won't it lead to inflation? Shut up, that's why.

1 I was expecting some full on geek from you about the apparent advancements in financing for poliwell.

High level languages (don't) byte My primary development language is Java, which is a pretty good high level language, in that it offers lots of useful features and expansive libraries even if it does take some of the finer control out of your hands.  It's even got some very handy libraries for arbitrarily-large integer and floating point math (i.e. BigInteger and BigDecimal).  All of that put together makes it a pretty handy language for doing math type stuff.

... or so you'd think.  Java lacks one crucial element for doing serious math/crypto work directly: the unsigned byte.  The thing java calls a byte contains signed values in the range from -128 to 127.  This is an amazingly frustrating thing to discover in the midst of attempting to implement any algorithm that requires real bit twiddling.  You can still do it, but you constantly have to work around the fact that you're working with a signed byte, and the fact that Java will refuse to assign it a value like 0xff.  The frustrating thing is that it wouldn't have been hard to add an unsigned byte to Java as a primitive type, but for some reason the Sun guys thought they could do without.  I managed do implement RSA in Java well enough, but I tired rather quickly of trying to do AES with it, and ended up going to MatLab.

Yeah, I know, copout on my part.  It was a class assignment, though, and the language chosen didn't matter, only that the steps were illustrated, and finding MatLab code for AES was trivial.  Next time, though, I'm ready.
more...

I've got an A in this class, no question.  I'm set.  I've missed maybe 2 points out of like a thousand in the class.  It took every ounce of resolve not to answer this with:

"Both have three letters, and start with C.  Both also have a B, though they occur at different locations.  You didn't ask for it, but in contrast, one has an additional C, while the other has an F."

Cryptology as a capstone I'm starting in on the last class needed to complete my master's program.  As luck would have it, I've been able to substitute grad-level cryptology for what ought to have been a graduate course in analysis or statistics.  Analysis in this case means proving things like calculus and trigonometry actually work, and statistics means proving things like central limit theorem.  Analysis was interesting but not especially relevant to my professional life when I took it at the 400 level, and I've had statistics a dozen ways from Sunday as part of discrete math, physics, and data mining courses.  Neither was terribly enticing.

Cryptology, on the other hand, is everything I've ever wanted from mathematics.  Crypto is where pure math becomes something physical, tangible, and powerful.  Many great mathematicians of the past lived and died, spending their entire careers studying and proving what would one day be the theoretical underpinnings of modern cryptology, many of whom never saw any of their work have a single practical application.  Now it's at the base of nearly every electronic communication in one form or another, and without it much of our modern world of e-commerce, email, chat, and ATMs would be impossible.
more...

The AMV that introduced me to Scooter, and thus my favorite song ever Scooter, One (Always Hardcore)

I've categorized this post as Math.  I feel it adds something without being derivative.

Watt's Up With That?
Climate Skeptic