Not all is doom and gloom, it would appear MSimon (aka the hardest workin' IEC fusion blogger in the whole darn blogosphere) has a post up at Classical Values about the navy contract for WB-8.  There are a lot of positive implications just from reading the contract.  Simon sums them up nicely:

What it means about past work: it went well.
What it means for the future: verifying engineering rules
More: there is a plan to test the Hydrogen/Boron 11 fuel combination
More: They must be confident of results since they are planning a WB-9

As they so often say, go read the whole thing.  I actually took the time to skim through the contract -- having just a wee bit of experience reading these things -- and I agree with Simon's conclusions.  This looks like a lot of behind-the-scenes positive development.  My fingers remain crossed, but I guess we'll find out in a few years.

Assuming, of course, that we still have a Navy in a few years.  They are so pricy, you know?  And we could always just put the Army on boats, right?  Isn't health care more important, and a clearer constitutional priority?

As Douglas noted in the comments of the prior post... The funding situation for EMC2 has changed recently. They are actually going to be receiving a pittance of funds from the gigantic pile of boondoggle that is officially known as the American Recovery and Reinvestment Act (i.e. Porkulous). MSimon posted about this in April to the IEC Fusion Technology Blog.

To be fair, I say it's a pittance because it's $2M, when they need closer $40M to really get going, and at least three to five million just to complete their own scoped phase 1 research. I also say it's a pittance because according to the government's own website, Energy alone is getting $43B, and Science and Infrastructure are getting $111B. The nebulous category of "Protecting the Vulnerable" is slated for $81B. Health Care is getting $59B. The relative dollar numbers tell me that the government still isn't serious -- in the slightest -- about real, fundamental energy research.

The truth is I'm fine with that, fundamental energy research is not the government's job. The problem with that stance is that government still dabbles in it -- and does so very poorly -- which affects the availability of resources for anyone else attempting to fund their own research. It means that when recruiting scientists and other workers, privately funded efforts must make bids for their services in competition with bloated goverment budgets. It means that demand for many specialized and narrowly-purposed hardware components is higher, while the supply might be inelastic, meaning again that private money must compete with public money for goods. Public money can outbid you, every time, even if they have to inflate the currency to do it.

EMC2 has had a plan laid out since at least a year prior to the death of Dr. Bussard, outlining expected expenditures of less than $205M overall, just to discover if polywell fusion with D-D and P-B11 fuels can produce a substantial, continuous net energy output. If I want to be a real skeptic I can say their numbers are undersized, and they really need about twice that, or slightly more, say $450M or so. This is one of those "if it works, it'll change everything, including national security" kind of situations. We're blowing a metric crapton of dollars in the immediate future, we may as well "waste" $450M and find out if this thing works, perhaps by "Protecting the Vulnerable" a little bit less, or letting young, healthy folk pay their own way on health care just a teensy bit longer.

Now, with all that said, I'd like to see an equal amount of funding for LFTR, because I once heard an old proverb about eggs and baskets, and I'm not one to question sagely advice about eggs.  One of these two methods is bound to work at least close to the way it's envisioned by proponents, and either one will change the balance of energy generation so dramatically as to make the importation of energy entirely unnecessary.

In the end, my hope is that the $2M is somehow just enough to get some really good, hard data that will convince someone with a fat wallet to fund a phase 2 effort.  My fear is that it won't be enough, and the lack of results will be used as further "proof" by detractors that fusion only works when it's much bigger, much more expensive, and far less practical.

I'm sure this can't possibly lead to inflation

Why won't it lead to inflation? Shut up, that's why.

1 I was expecting some full on geek from you about the apparent advancements in financing for poliwell.

Oats I'm not saying where I found this, or that I'm proud of it, but it's hilarious. 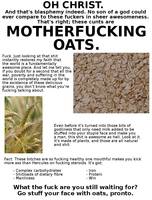 1 Admit it. You made ityourself. No one else could feel the same way as you do about oats, except maybe a horse.

2 I swear, I found it.  I admit that it spoke to something deep and sacred in my being, but I can't claim authorship.

I don't blog in May. It's a religious thing, or something. So now that that's over, I make a promise.  If Penske or the Chinese fire the UAW, I'll buy a Saturn or a Hummer.

Watt's Up With That?
Climate Skeptic